We have been moored alongside the dry dock for a week now and there has been some progress. Not as much as I would have liked, but then again, isn't that always the case? Wednesday and Thursday were spent mostly in the skipper's cabin. I have moved all the wood out of the cabin and it has been put on pallets and then dropped in the dry storage area in the yard. At least now it is mostly out of the way and I can work in the rear cabin for once. 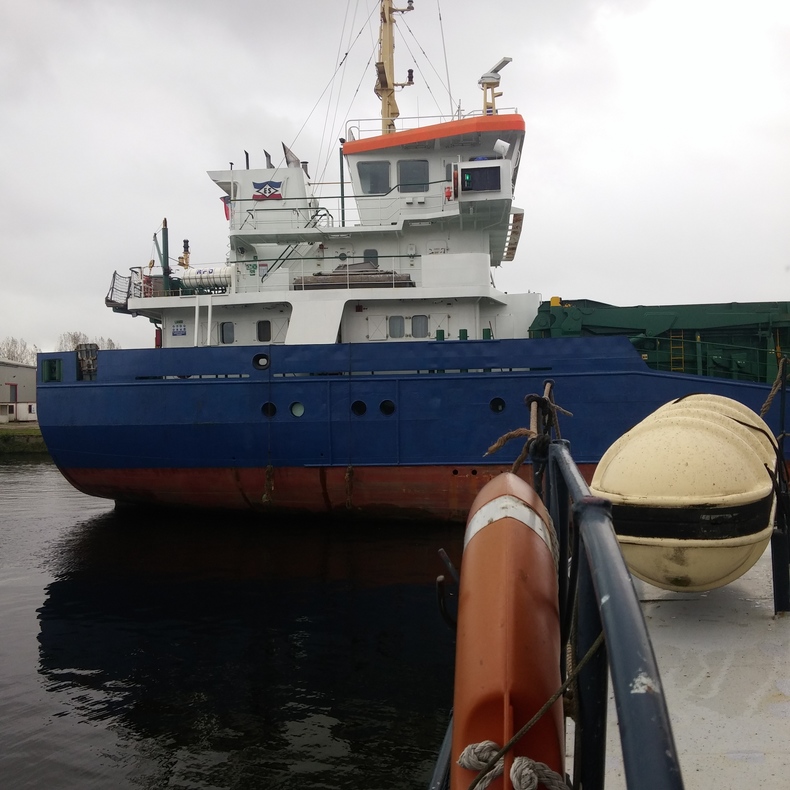 Not everyone was impressed with Zeelandia's immense bulk...

Removing more of the wood flooring has revealed more of what 30 years of condensation and small leaks from the kitchen sink can do to steel. 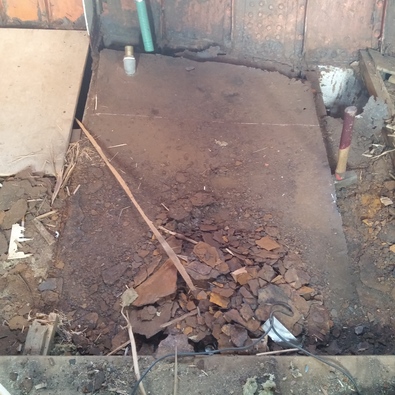 The whole steel floor is shot and will need to come out. There is a lot of scale rust which needs sweeping up and dumping in a skip before I get to the fun part of plasma cutting the floor. In my eagerness to remove some of the flooring I have removed a piece (mistakenly) above the air bottles in the engine room. I will have to weld those floor pieces in first and ensure they are sealed before I start shot blasting. The last thing I need is rust, blasting media and dust getting caked over every rotating and reciprocating doofah (that is a technical term) in the engine room .

I have had a willing volunteer this week. Andy is an avid reader of the blog and his assistance has been massively appreciated. On Friday we made excellent progress and managed to remove all the portholes which was a huge job and definitely needed 2 pairs of hands. I also introduced Andy to the delights of stick welding at the end of the day. I set up the welder and gave him some rods and a bit of scrap steel I had kicking around just to practice on and get a feel for it. In no time at all he was getting to grips with it and was surprised how simple it was. We may have a convert to the ways of welding! Andy, thank you for your help and good humour. It's dirty, nasty and unpleasant (working with me) and your efforts are massively appreciated.

On Saturday I hired a 'scabbler' from a local hire company and made a start on removing the paint from the superstructure. 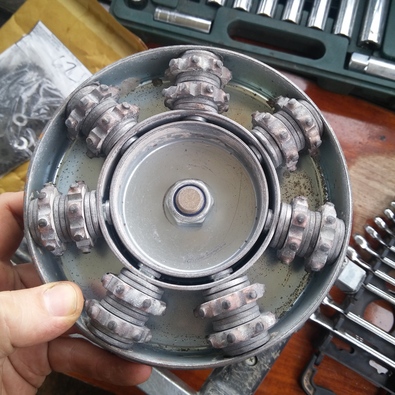 These are the concrete scabbler blades - I took the photo so I know how to put the blades back in the right way!

I had to purchase a set of blades for the scabbler as the hire place only sells blades for masonry and concrete scabbling. I contacted the OEM and £50 later and 2 days postage I had a set of hardened steel C2 blades for use on steel.

This piece of kit is pretty impressive. The little scabbling blades are free to rotate but the whole housing whizzes around at about 1500-4000 rpm. Once you have the hang of the technique it makes short work of the paint work, even compared to a wire brush on an angle grinder. 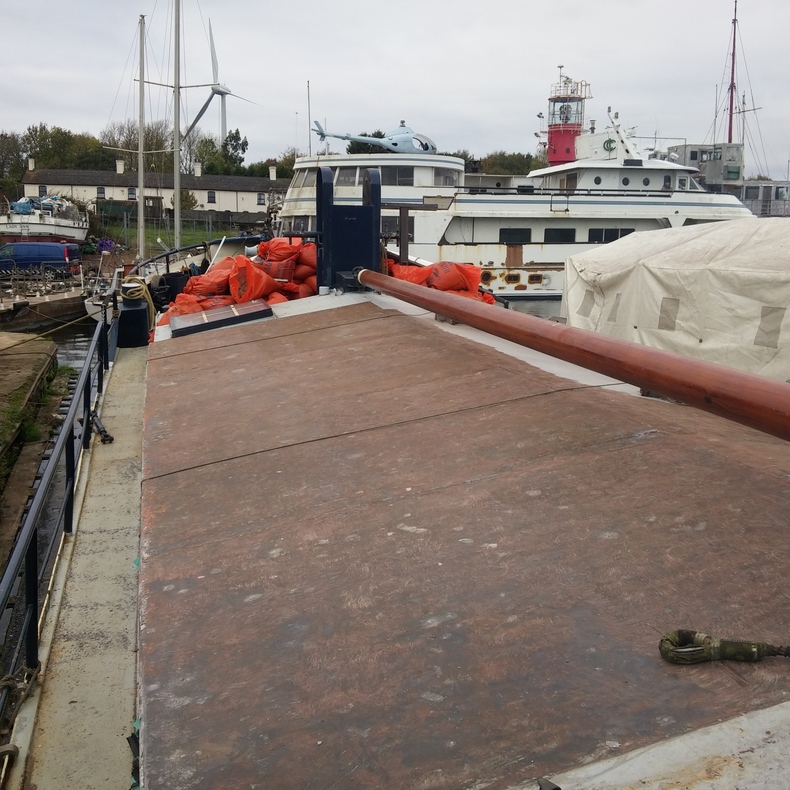 The result of about 4 hours of scabbling. Probably 12 square metres of roof surface stripped back with the 7 or 8 layers of paint coming off in big chunks.
I have the scabbler on hire for about a week but suspect I will have it for longer depending on how much progress I make.

While Andy was wielding the scabbler like a pro I was faffing with the needle gun (waste of time) but then with the compressor up and running I thought I could cut the 'eyebrows' off from above the portholes. I am a little suspicious of my plasma cutter as it keeps tripping the RCD at the marina so it makes and plasma cutting job ten times longer than it should be as I have to keep dashing up the ladder to reset the electrics. I thought there might be something wrong with the cutter so proceeded with caution.

I needn't have been worried. This little CUT50 plasma cutter saw off the 4mm steel plate pretty cleanly and all that is left is for me to grind down the scars left where they were welded on. Once this is done I hope to be able to get the scabbler on the vertical sides of the cargo hold and strip that paint too. 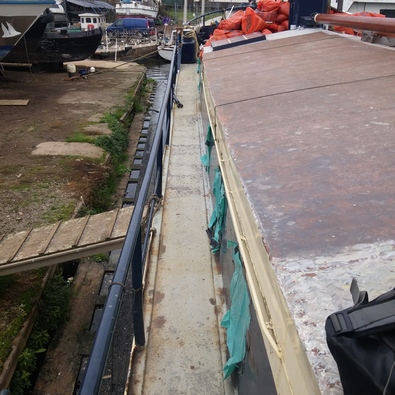 Note the lack of eyebrows over where the portholes used to be. If you are doing any serious steelwork removal, a plasma cutter and big (ish) compressor are a must. This would have taken hours with an angle grinder and been much harder work.As Andy commented on as we drove back after the second day on site, "Having the right tools makes the difference"... He is wise that man...

There is a rail which runs down each side of the cargo hold too which you can see just above the portholes. It seems to serve no real purpose and I think its days are numbered. It makes for a faffy painting job and if not done properly would allow sea water ingress and probably start leaking brown rust. I have a feeling the plasma cutter will be called up to cut this off and then grind it flat for a smooth finish.

Cutting the eyebrows off has shown that the plasma cutter works, so should make swift work of the (now) very thin steel in the skipper's cabin. Getting all that out, replacing the steel over the engine room and then shot blasting inside will be a huge leap forward but I suspect will be secondary to removing the external paint. I can shot blast whilst I am alongside after dry dock, the priority is stripping the paint in time for when the sprayer comes in.

We have had the quote back from the UHP blasters and was, quite frankly ridiculous. They had gone to town and quoted the full gold plated solution. Not exactly what I was looking for so the dry dock owner is going to approach another blasting company to see what they can do and then I would like to separately contract out to an airless sprayer for the painting. The paint alone for the external runs to just under £2k which seems pretty reasonable considering Zee's generous proportions... We have decided on keeping the break in the black and cream but will be going for a lighter cream on the upper surfaces, with no other detailing at this juncture. We will decide on what colour the handrails etc will be in due course. At the moment we want a solid base coat so that she is protected.

It looks like drying out will be early next week although we have a slight delay waiting for the other vessel coming down from elsewhere. In the meantime I shall be scabbling, plasma cutting and shot blasting to my heart's content. It's not the greatest way to spend October but needs must when the devil drives.