Of Dogs and Melancholy

The last few weeks have been, how do we put this, emotional. The blasters arrived, and promptly couldn’t start due to a compressor not being delivered. Then the pump broke. Then there was a cold snap which ended up freezing their lines so progress was a little, erm, slow. Add to that the fact that I doubt Zee had been stripped of her paint in 40 plus years and the bitumen was half an inch thick in places the blasters had some serious crud to remove. They earned their money that’s for sure.

The Ultra High Pressure blasting revealed more holes in the hull, some popped rivets and, disappointingly, some very sloppy welding by previous welders. There was some welding done in the shipyard in Urk post our (useless) pre purchase survey (thank you Selles and Von Dijk). To say that the quality of the work is poor is an understatement. “Dogsh!t” is probably a far better description and they may as well have used dog poop instead of welding rods for the good it has done. 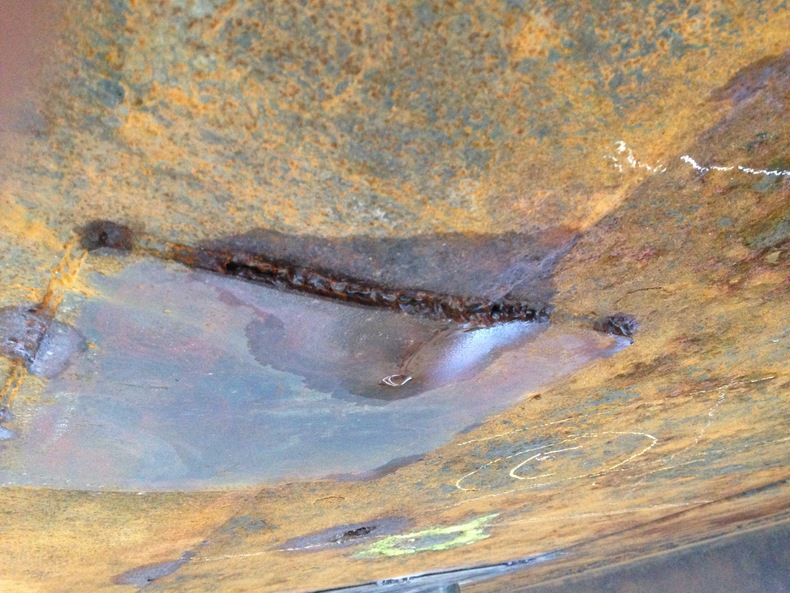 Here we can see the plate welded over the bottom of the ‘poop tube’ which was connected to one of the toilets. The damp patch is water coming out of the hull (heavy rain had got in through the covered portholes) as the welder had left enormous gaps between the hull and the plate. This is shoddy workmanship and poor welding. Additionally there are sharp corners to the plates which are a massive failure point for welds. So not only is the weld not watertight, the chances of failure and the plate eventually failing are pretty high too. Nice. 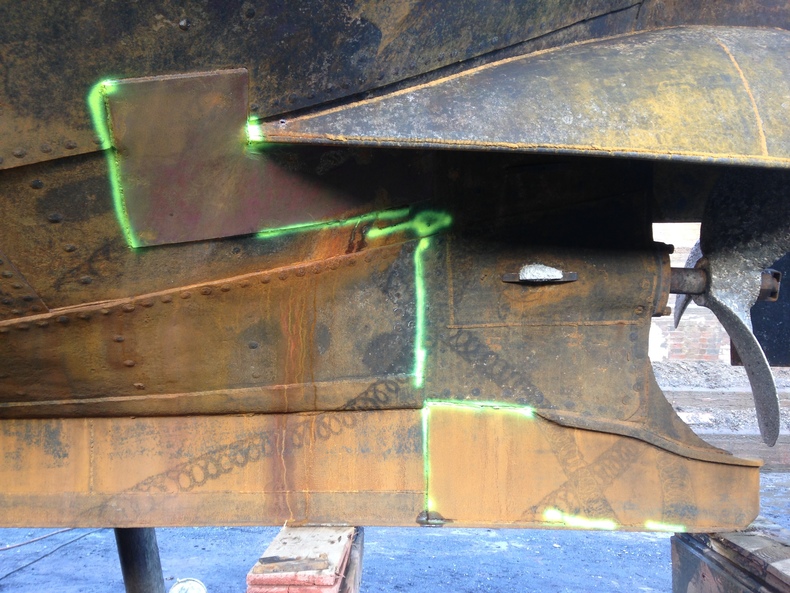 And here we have another example of poor workmanship. Again, non radiused corners and all the neon yellow paint indicates areas where the welds were not complete and water could get behind the plate. If you look closely at the zoomed in version below you can see... 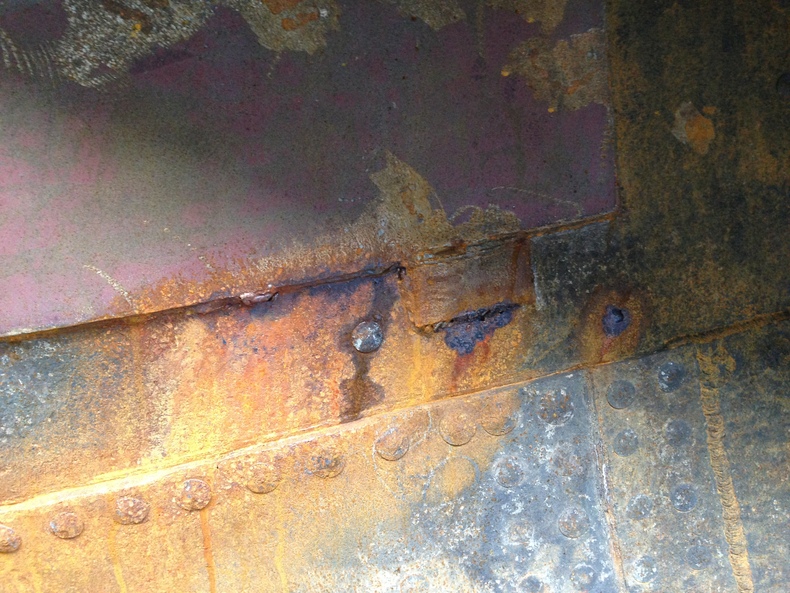 ...an area where they have obviously blown through the thin steel and have then added another small add on plate which, hilariously, they didn’t even have the skill to get right as they have blown through at the bottom of that and again the welds are not continuous. The dribble of wter has actually come from behind the supposedly water tight repair as rain got in at the top of the plate and worked its way all the way down. Again a reference to dog excrement is valid here for the work quality. This will need rewelding and most likely the small plate will have to be removed and a larger plate made to fit between the bottom riveted plate and the newer plate (once rewelded).

The bottom looks like it will need extensive replating. Fortunately Jim, one of the welders, has made a trolley out of some scrap and some wheels which were kicking about the yard which means the large plates (probably a metre square) can be slid under the hull and got within 70mm of the bottom of the hull. A few wooden wedges to drive them up the final few centimetres before being tacked in place is all that is required. I have learnt a few things though. The ‘tack and whack’ - this is where if a plate doesn’t fit perfectly and there is a gap, you weld a tack and pump some heat into the metal and as you stop welding someone with a big hammer comes in and whacks the plate to bend it into place. Not only will it deform due to the heat but as it cools the metal contracts and brings the plate closer together. I also learned about how to use a ‘dog’ - an ‘L’ shaped piece of metal which is welded next to where the plate is needed. Several dogs can then support the weight of the plate and you then slide wedges in between the dog and plate to raise it to its final position where you can weld/tack and whack. Very clever and interesting to watch.

You can see the size of the plates in the photo below. There are at least another 3 plates of similar size to go on. Speaking to Jim he has indicated there are other areas he might be tempted to overplate just to make sure. Given the time saving dolly he has made I might make the most of his experience and take his advice on where might be advisable to overplate. Given the time saving on the plate fixing (ie money) some of that could be diverted to additional steel. 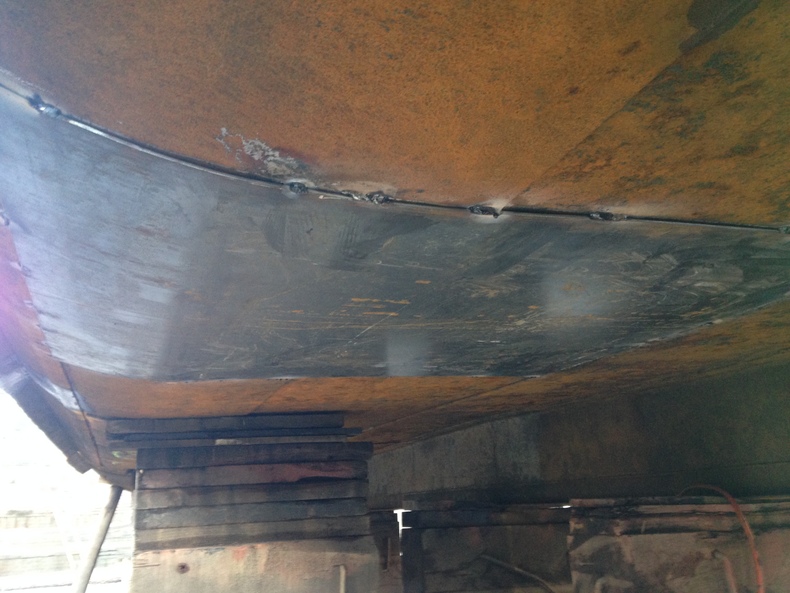 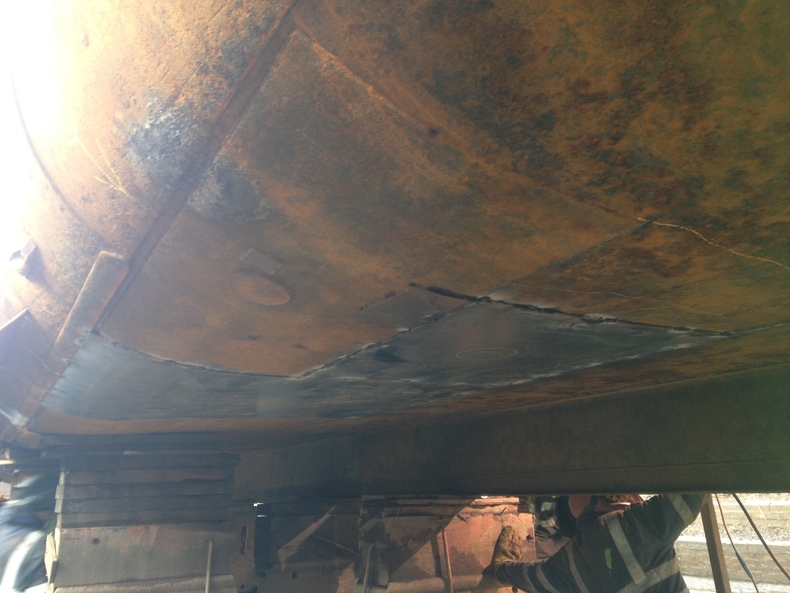 A Jotun rep came on site today to view the blaster’s work and make sure the surface was suitable for taking the 2 pack epoxy ‘Jotamastic’ paint. He said it was very well done and the paint system should take to it nicely. His advice for the bilge was to scrape as much of the grease off the frames and plate, clean as best with an emulsifying agent and then possibly finish with something like brake and clutch cleaner. After that he recommended a 2 pack (the same as the first coat on the hull) but applied with a proper airless sprayer. Using a roller would require at least 4 coats but an airless sprayer could do it in one pass and have the whole bilge painted in a day. It would require much moving of ballast but given the problems encountered in the bilge so far it would seem a sensible move. They advise not using Vactan (the acidic rust converter) but I am tempted to use it to stop the rust progress in its tracks. I will ruminate further on this question... 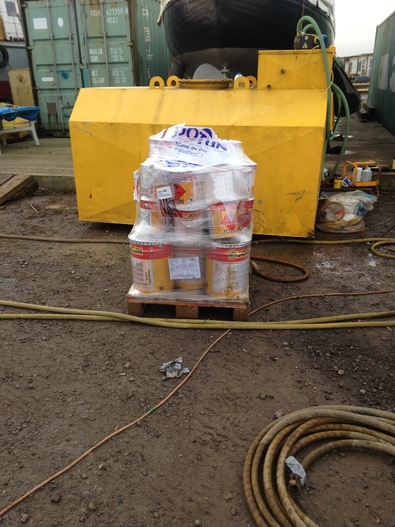 The paint arrived a few days ago. All £2000 worth of it. This may seem excessive but 2 pack epoxy paint is not cheap for a reason. It forms a solid barrier and grips/sticks to the substrate. Plus Zee is not a small ship so there's a lot of area to cover.One of the Jotun chap's tips was NOT to use a wire brush to prep the surface. Instead, a very coarse flap wheel on an angle grinder, scabbler or something like the Tercoo Blaster which can be attached to a standard drill. These options remove the paint but leave a keyed surface which the epoxy paint uses to grip. Too smooth a surface and the paint will ultimately flake off.

The pickup has bitten the dust. It went for an early MOT and came back with a pretty extensive list of jobs. Nothing disastrous but the labour involved on its own was over £450 so I have decided to move it on. If I had a garage I might be tempted to try and save it but I don’t have the time, inclination or wherewithal to fix it. Hence eBay it is. It seems that every day over the past 2-3 weeks has yielded more bad news of some description requiring a shift of assets or money and more work for me. To top off what was a fortnight sponsored by Satan himself, one of my old University house mates succumbed to cancer after an incredibly brave fight. In some ways it brought the triviality of our struggles with Zeelandia into focus but it was a sh$tty way to be reminded that these are temporary setbacks and will ultimately be lost in the 'noise' of the renovation. So despite progress and light at the end of the tunnel, the time has been tinged with disappointment and melancholy.

With luck Beelzebub will slip on the ice and snow we have had recently and crack his skull. When he is down I am going to kick him in the nuts, hit him over the head with a concrete ballast block, weight him down with the tonne of bagged sand from the bilge and laugh in his face. Then maybe, just maybe we can get some good news for once….

Until next time dear readers, I wish you all a happy, healthy and most enjoyable Christmas and New Year.